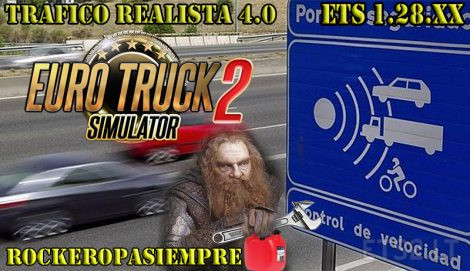 IMPORTANT IF YOU DISAPPEAR THIS MOD, OR EVEN ANY MANY.
Sometimes we deactivate a mod, but the game still behaves as if that mod were active, right ?. To solve this problem, it is very advisable, with this mod or any other, delete 2 files after disabling some mod.
The files to be deleted are: game.log.txt and game.crash
These files are in the following path: Documents / Euro truck simulator. Nothing happens at all because you erase them from time to time, they regenerate themselves. Sometimes they keep information about mods, which makes the game behave as if it had some mods, which we do not even use.

Changes in version 4.0.
– The mod is fully independent and compatible with any mod-pack AI traffic.
– In the case of using an AI traffic pack, place those packs always under AI_Trafico_Realista_4.0,
In this way, the behavior of the packs will be managed by the mod.

– Compatible with all AI traffic mods-packs.
– Behavior of AI traffic totally different.
– Complete information inside the downloaded rar. File INFO.txt and README.txt
– 2 Versions inside the rar file. One normal, and one that does not include sounds (NOT EXTRAS). Choose one of the 2.
Mod Manager: Always place on top of any AI traffic mod you have.

Download: In the download we have a winrar file, inside are the two versions. Choose one of the two, never the 2 at a time.

One thought on “Realistic Traffic v 4.0 by Rockeropasiempre for 1.28.XX”