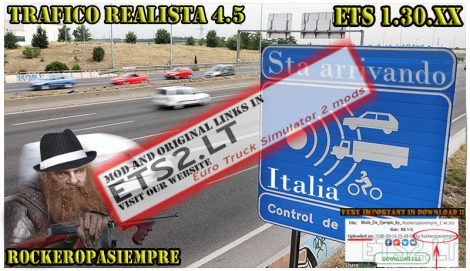 – 2 Versions inside the rar file. One normal, and one that does not include sounds (NO EXTRAS). Choose one of the 2.
– Mods manager: Always place on top of any AI traffic mod you have.
– Multitude of different colors for AI cars. Thanks Cipinho.
– Increase in overall volume of traffic on all roads.
– Less patience in the behavior of AI drivers.
– Descent of police cars
– Compatible with all maps and Dlc’s of the game. (Going East, Viva la France, Italy, Heavy Cargo, Special Transport)
– Compatible with all AI traffic mods-packs. (Place the mod on top of the IA packs you have).
– Traffic behavior of the AI ​​totally different from that of the original game.
– Complete information inside the downloaded rar. File INFO.txt.

– General increase in IA traffic, moderately, with little accident rate.
– They circulate in such a way that they never create huge traffic jams. This avoids having lag on computers with few features.
– Regeneration of traffic IA. During the hours of the day there is more vehicle traffic, than trucks and buses.
– Regeneration of heavy traffic (Trucks and buses). During the day hours there is less heavy traffic. Truck traffic is higher at night, just like in real life.
– Intermittent traffic between 12:00 and 16:00 hours, where traffic is more varied and unpredictable, both heavy and light vehicles.
– Increase of the IA traffic of long vehicles (tandem) in the hours of the dawn.
– The safety distance of the accompanying cars of heavy loads extended by 10 meters. Dlc Special Transport.
– The speed of travel of the guide cars of the Dlc Special Transport has been extended by 10 KM / hour.
– Eliminated the pink color for truck and vehicle IA paintings.
– FOR THOSE WHO USE THE NORMAL VERSION MODIFIED THE FOLLOWING SOUNDS:
– Sounds of road works
– Bee sounds from the AI
– Sounds of normal trains and the TGV