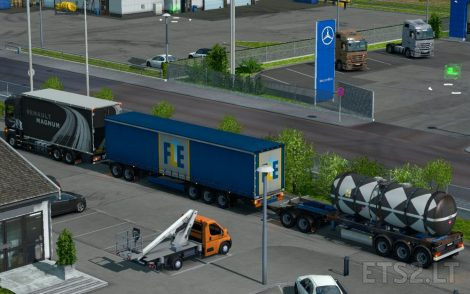 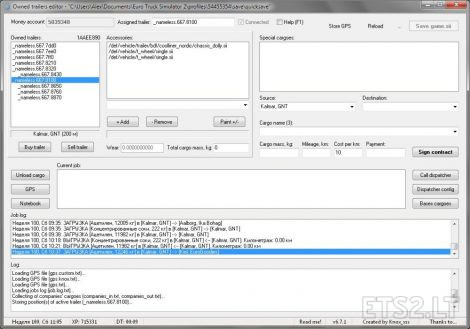 This version supports multi-trailers (doubles, triples, etc.). How to build, load and unload them – see the video “Multiply trailers – build, load, unload.mp4”. While loading the cargo in the trailer, the weight is distributed evenly between the trailer and his truck (trailer leading), but only have the leading no jobs!

Now every load has the coefficients of the COG (file cog.txt). If the program finds that the COG of the load, the default will be used COG (0, 0.4444, 0). You can manually change the COG of each load in the program (in the “Bases cargoes”).

Now in the window “Hotkeys config” key codes are represented by names instead of numeric codes.

It is now possible to abandon a selected job, press [Delete] in the job list.

Now when selling the trailer, taking into account the prices from a file trailers.txt.

The Mods folder contains the mods required for the full operation of the program:
– tedit_notebook_ats.scs modified the laptop for American Truck Simulator
– tedit_notebook_ets.scs modified the laptop for Euro Truck Simulator 2
– tedit_opengates_ats.scs – open the gate for ATS 1.6+
– tedit_opengates_ets.scs – open the gate for ETS2 1.27+
– tedit_system_font.scs – changed the font for the console (for ATS and ETS2).
Place the files in the mod directory.

The Plugins folder contains the plugins required for the complete functioning of the program. These plugins need to interact with the program directly from the game. Plug-ins are available in two versions – for x86 and for x64. Copy the entire folder “bin” in the folder where the game is installed: …Euro Truck Simulator 2 or …American Truck Simulator.

The majority of assistance (prompts) you can read directly in the program by pressing F1 and moving the mouse pointer to any elements of the programme. There are also some videohelp in the folder Videos.