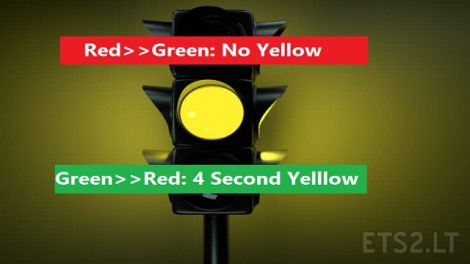 I have been driving cars in the United States for decades. Where I have driven, traffic lights (aka semaphores) display at least a four-second yellow before changing to red. Also they display no yellow light before changing back to green. ETS2 semaphore behavior is strange to me; I have been unable to become accustomed to it.

Because I’m set in my ways, I spent some time editing files today, and tonight I am publishing my mod in case anyone else wants it.

Because the map is so large, I’m not convinced all the semaphores got changed (I don’t want to take the time to check everywhere). So, if you guys want to report back to me where it’s working and where it’s not, I’d appreciate it.

This mod is intended to work with the vanilla map, any/all map DLCs up to and including Italia (where semaphores are scarce; I have found none so far), and promods v2.25 (in mod manager, place this mod above ProMods Definition Package).

This mod contains only semaphore-dedicated files, so I don’t expect it to interact with any but map mods.

Spot tested on version 1.30 with all map DLCs sans promods and then with promods v2.25.

6 thoughts on “All Semaphores have Four-Second Yellows”