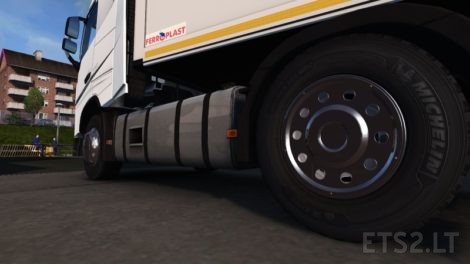 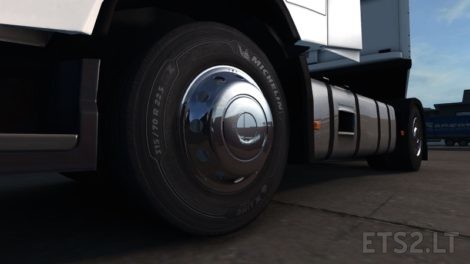 I wanted to somehow put the usual steel hubcaps for the entire hitch in a circle. After a long and unsuccessful search with a survey of many variations of several tuning packs (mostly Turkish, with very unusual, but unusual forms), I decided to do it all on my own. He started with a cap for the front wheels, and only then decided to make the rear ones, because the “Hatch” cap from SCS did not look completely harmonious with mine. I present the result to you.
For possible flaws in appearance, form and possible technical deviations from any particular model of a particular manufacturer, please do not scold too much, the task was to achieve only a more or less recognizable appearance, which is called “based on”.

Hopefully, SCS someday will make such a pair themselves for their “Hatch” caps.

The modification adds to the game caps of wheels made of stainless steel with round holes, suitable for installation on the wheels of both the towing vehicle and the semi-trailer.

Work on previous versions is not guaranteed!
* previously checked for 1.33, on which I am still sitting, but the PMG files had to be updated under the latest format, and, unfortunately, I was able to check them only on ATS. But since the PMG formats on version 1.35 are the same for both games, I hope that nothing will be critical.
If necessary, I can post a version with old PMG formats for the game version up to 1.35, for the same “old believers” like me 🙂