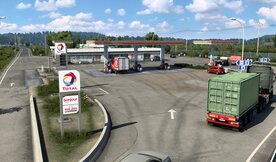 This mod was created to replace hardcoded gas stations that are hard to fully edit for most modders :