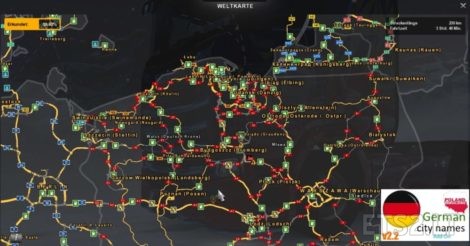 This mod should be placed above all other map mods in the mod manager!
Tested with versions 1.31 and 1.32 of the game; it should also work with newer/older versions.

The capitals of all countries are written in CAPITAL LETTERS on the map. (E. g.: “BRATISLAVA (Pressburg)”)

IMPORTANT: For MIRFI’s ROMANIA MAP, Arayas’ RoEXTENDED MAP and POLAND REBUILDING MAP there are extra files within the archive “German_City_Names_v1.4.scs” which you have to extract and activate if you use one of this map!