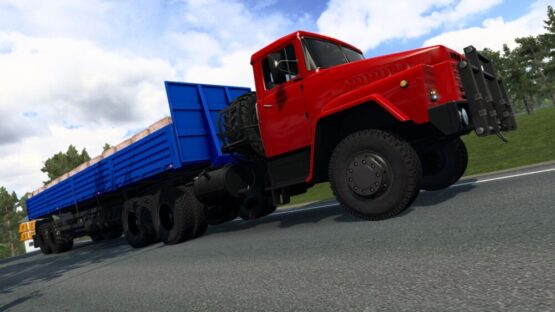 Autonomous, does not replace anything, is bought in IVECO and Dealers of KrAZ Modifications.
Your salon.
2 chassis: 6×6 and 6×6 tandem.
Two fuel tanks with a total volume of 850 liters.
There are accessories in the cab.
Own wheels 2 options.

Last changes:
Attention: Errors are excluded, since the mod was tested on a test profile!
Adaptation for ETS2 version: v1.44.x – v1.45.x and up.
Converting the main 3D model “PMG” under ETS2 1.44 and 1.45 (SCS Blender Tools).
“PMA” animation conversion for ETS2 1.44 and 1.45 (SCS Blender Tools).
In the interior, the highlights around the windshields were removed to a minimum, I could not fix it further,
because these are the faults of the mod itself and it is not my fault.
After converting the main 3D model, all “MAT” files are automatically added to the “automat” folder.
Found and fixed errors in the “TOBJ” files themselves, when converting the main 3D model.
Changed the position of the steering wheel to standard + pack steering wheels.
Added historical glossy paints – 42 options.
Fixed bugs in other previous versions 🙂
Fixed in-game log to be 100% clean.
The mod is fully optimized and ready to go.