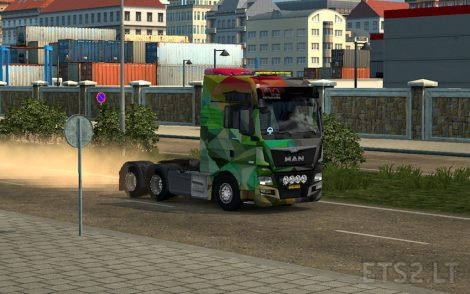 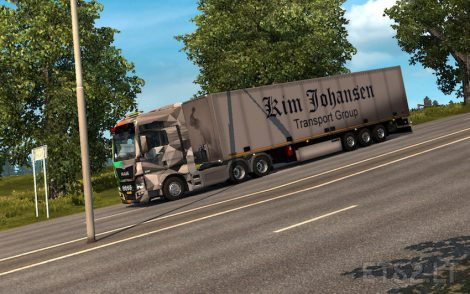 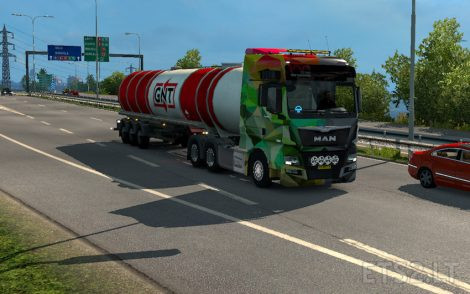 This skin is really special to me for many reasons. For one, I’m a big
fan of tessellation (polygon pattern) design and for someone to
skilfully use that on the MAN TGX XXL cabin is just breathtaking. The
moment I laid my eyes on that livery, I knew I had to make it. By the
way, this is one of the most challenging liveries I’ve worked on, as
yet.

The actual livery, known as MAN Tattoo is a livery design contest run
by MAN. The winning design got the MAN Tattoo Truck of the Year in
2014 and obviously the tessellation pattern won. I had the privilege
of getting in touch with the winning designer, Patrick Leyendecker,
who was very kind enough to send me the files and also generous enough
to let me make an ETS2 skin. I had to make the skin, polygon by
polygon on Illustrator (yes, first time using it!) as the files he
sent me didn’t fit MADster’s MAN template. Yet, I’m grateful for his
kind gesture as I could extract all the exact colours from the files
he sent me. I’m really grateful to Patrick for letting me work on his
design and for freely allowing me to use it in the game. If you’re
reading this Patrick, a huge THANK YOU! I’ve done my best to match the
original, polygon to polygon and I hope I’ve done justice.

Presenting MAN Tattoo Truck of the Year 2014 for the first time on
ETS2! This skin obviously works only on MAN TGX Euro 6 mod by MADster.