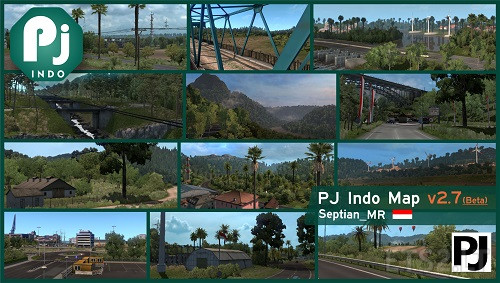 [ENG]
The new side of Indonesia fictional map with fresh nature and chalenging roads. It is the new parallel world of Indonesia.

Changelogs:
– Compatible for Euro Truck Simulator 2 patch 1.38 and above (1.39 open beta)
– MAJOR REBUILD over western part of south region/island (Part-1)
– Improved two exsiting cities in north island with new map assets
– Added A LOT of new map assets and models for this map (will be used for my next real Indonesia Map)
– Fixed some bugs

Notes:
– Not require every map DLC’s (you can use this map with or without map DLC, even if you don’t have completed one).
– Compatible with so many add-on maps (for global map combos).
– This map can be switched into stand-alone map (see ReadMe for details)

Special thanks to:
SCS as game creator of ETS2 and ATS, some Indonesian modders for my ideas of new map models, and some people from any mod forums and my FB page who helped me a lot.