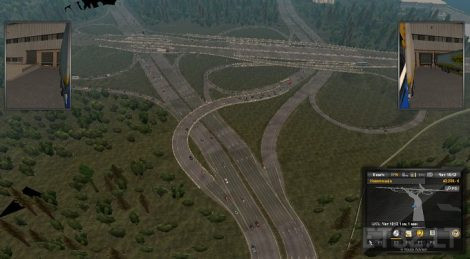 Changelog:
V.1:
St. Peterburg ring road (officialy KAD) is rebuilt.
V.2:
– Whole M10/E105 between St. Peterburg and Moscow is rebuilt: new interchanges and road profiles.
– Both part of new highway M11 are built (from 2 to 5 lanes). I can’t be proud with quality, but, sections aren’t long, so you won’t feel it.
– Moscow Ring Road (officialy MKAD) is rebuilt, extended to full circle and widen to at least 5+5 lanes.
– M9, M1/E30, M3/E101, M2/E105 and M4/E115 from Moscow to A108 are rebuilt and widen to 3+3 and 4+4 lanes. I couldn’t wide M3 because of crossroads, so I had to built new road and interchange with ring road on bridges and keep old road on ground, under them.
– According to Russian government decision, I increased speed limit on M2, M4 and M9 to 130 km/h.
– All those roads except M4 and M5/E30 don’t lead directly to Moscow. You must exit from them. That it because they have 5 lanes and crossroads only 2, so it is only way to avoid big traffic jams.
– I rebult total 18 interchanges and built 16 new, including replaced crossroads. About 30 ohter interchanes are sheduled for rebuilding, which is about half of work.

Promods version:
http://sharemods.com/159jrv3wsu2p/Realistic_Russian_highways_Promods_version.zip.html
Non-Promods version:
http://sharemods.com/ya1hgr9itxm5/Realistic_Russian_highways.zip.html
Main link will lead you to page where you can choose files which you want to download, ask any question, report bug/crash and follow my work. There are all my mods.