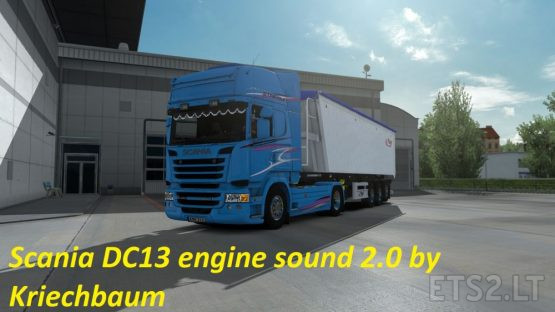 I have finally finished my DC13 engine sound.
This sound has been recorded myself few months ago on a real Scania R490, using a Zoom H5 recorder. The sound quality used now is the raw one 96khz 24 bits stereo .wav sound files. Fmod uses both .ogg or .wav so i don’t need to convert the format and then i also avoid to reduce the audio quality.
I have made some small improvements on it in this convertion with Fmod, it sounds smoother than before, i always let the sliders for the sounds settings at 50% but if you want more or less bass you can lower the exhaust’s slider.
I have also added the accessories interior sounds, sticks, blinkers, wipers, lights, retarder stick, and the low air warning sound. For the air brakes or gear sounds it’s not convenient since they are NOT autonomous anymore and they replace these sounds on every truck in the game. This part of the sounds are still WiP on the SCS side though.
This sound mod works with the SCS R and Streamline series (not the new gen).
RJL R, Streamline and T series.
Scania P and G series by GTM and RJL.
Scania R by Fred.

To have that sound choose a “DC13” engine in the shop.

i’ve also replaced the default SCS horn by a realistic one.