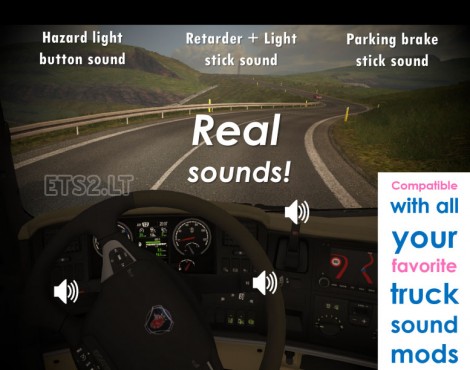 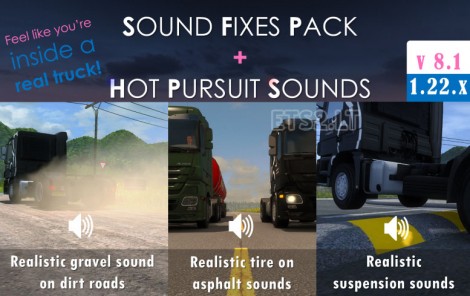 This is a mod that replaces stock sounds to be more immersive and realistic, taking the simulation to a whole new level!

+ The shrill retarder sound from SCS has been replaced with a more realistic meatier retarder sound. Note: It is possible this sound will be reworked again to make the “whine” of the retarder less faint in a future version.

+ Fully rebalanced the asphalt tire sounds. When driving slow on flat asphalt roads, the tires are barely audible in the cab.
But when picking up speed, the tire sounds will become more audible.
Tire sounds now blend in more seamlessly at high speed.

— Features of this mod —
1. Increased volume for interior stick sounds (e.g. releasing parking brake, blinker stick lever)
2. Realistic interior stick sounds for: parking brake, retarder stick, blinker stick and light switch
3. Realistic interior and exterior tire sounds
4. Heavier gravel sounds when driving on dirt roads
5. Some UI sounds decreased
6. Sometimes you will hear a key chain swing sound when on bumpy roads or when hitting a small obstacle
7. New suspension sounds
8. Wind will sound slightly faster from cabin when you drive at a high speed
9. You can hear the slight sound of vehicles overtaking you or passing by you
10. If caught driving too fast, a police siren will be triggered so you (maybe) have to pull over to stop the noise
11. “Late music” replaced with phone ringtone sound for a realistic touch
12. Gas pump and trailer coupling sounds made more realistic
13. Retarder sound replaced with meatier sound
14. Compatible with all trucks including mod trucks. Does not replace individual truck sounds.