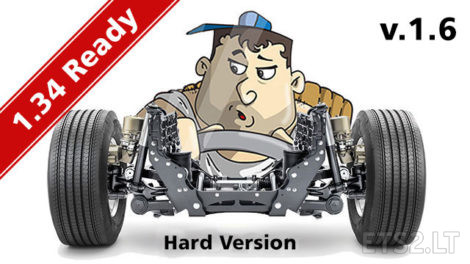 This mod increases the truck’s cab oscillations. In ETS2 the drive is fixed as if it is connected to the seat. The drive head does not move. It is designed to partially simulate the movements of the driver’s body and the driver’s head.

You can adjust the trailer balance as you wish. My mode does not change your existing trailer settings.

The feature that distinguishes this version from the SOFT version is the faster damping of cab oscillations.

In your settings, realistic camera movement must be marked and the coefficient adjustment slider must be set to 50%. You can find the setting that best suits you by changing the ratio.

Features that distinguish this version from the Soft version:
————————————————– ——————
Rapid damping of cab oscillations was ensured. This reduced cab oscillations during braking.
Resistance of the drive to centrifugal action is reduced
Wheel suspension of other trucks except Scania R is increased.

All SCS trucks are compatible with Volvo trucks from Eugene and Pendragon.
(SCS will work well with all 3rd party trucks using truck chassis.)

With 900 degree steering wheels you get the best result.