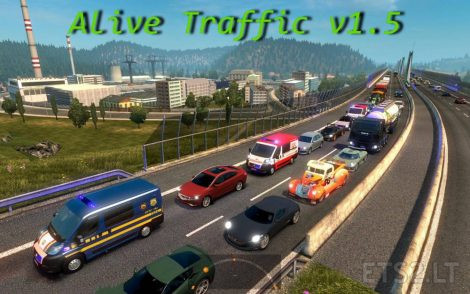 The purpose of this mod is to simulate real life traffic and human driving as much as possible. This mod provides:

– Real life traffic experience where vehicles have speed variation depending on what kind of drivers for example; cautious people would not go over 90 km/h, lost tourists finding their way at 65 km/h, or a granny who barely sees beyond 20 meters driving at 60 km/h !!! Don’t worry, there are plenty of rich young drivers with their luxurious cars daring the devil at over 130 km/h.

– Challenging traffic where you need to overtake the slower vehicles on 2 lanes roads from time to time just to make your urgent delivery.

This mod set vehicles in 3 categories, Fast, Medium, Slow vehicles according to their looks but in balanced quantity between the categories.

– Trucks’ top speed = Randomly between 65 – 90 (to simulate variation of their load weights).

– Buses’ top speed = 80 km/h because they are responsible for the passengers’ lives.

– Cops’ top speed = Randomly between 70 – 120 km/h because some of them are on a routine patrol, some are responding to an emergency, some are just …. eating hamburgers. Now the cops stay with you a little longer instead of gone in 2 seconds as before.

– According to my observation, most slow vehicles try to drive on the slow lane and let you overtake them wherever they can, but of course just like in real life, there may be some nasty drivers who think they own the road. And that’s not because of my mod, this mod is using the vanilla ai safety behavior.

– 2 seconds longer yellow traffic lights between green to red at intersections in most (if not all) cities. The vanilla is 2 seconds, this mod increases to 4 seconds according to real life cities.

– Slightly increases traffic density without hurting the frame rate. The density is different from city to city and time period.

V1.5
– 2 seconds longer yellow traffic lights between green to red at intersections in most (if not all) cities. The vanilla is 2 seconds, this mod increases to 4 seconds according to real life cities.