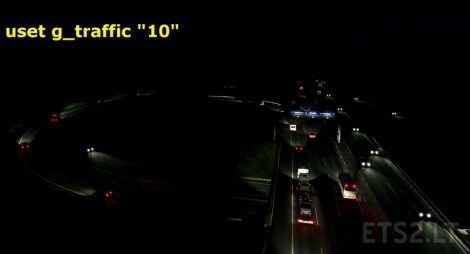 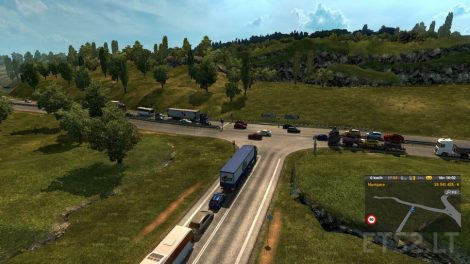 Diversified AI traffic based on the important hours of the day.

IMPORTANT!
This is the first mod for ETS2 1.30 to do that because all the previous spawn traffic mods for previous versions are OBSOLETE.
This mod will be tested further more and future versions will be released.
READ THE TIP AT THE BOTTOM!
and you will understand why you dont need 3 versions of this mod, like low, normal and traffic jam.
You can adjust that on your own.

Best driving during the day and night with diversified density !!

Works in every map, truck or car or trailer mod.
Priority high, above any map.

IMPORTANT TIP:
OPEN DocumentsEuro Truck Simulator 2config.cfg with notepad or other text editor and look for
the line

This is the best way to increse the value for your traffic in the game without any mod. You dont need a mod for that!

1 is the lowest value and the traffic is very sparse.
10 is the maximum and this is the way to get your beloved traffic jams (seen in my videos from AI Superlights mod)

My mod doesnt interfere with this value, my mod simply realocate existing density by the hour of the day.