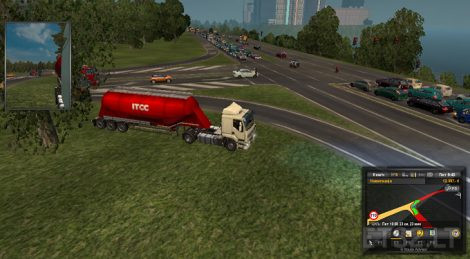 Main goal: This mod is mostly designed to those players who like high traffic and are bored with one lane-interchanges and stopping on tolls.
However, high traffic causes traffic jams and slower traffic flow. My mod will increase the speed/fluidity of the traffic flow through the following modifications:
– I added semaphores on all crossroads where are at least 2 entrances with 2 lanes.
I didn’t do it on some crossroads in cities, between two crossroads with semaphores.
I am sorry for traffic lights in air, adding poles takes too much time. For me, the most important is that semaphores are working.
As some of SCS’ crossroads (highway at-grade crossroads) don’t have semaphores, use ASSETS if you want them;
if you don’t use ASSETS with Promods, Dutch map and Southern region.
WARNING!!! If you use ASSETS with Promods, Dutch map or Southern region, game will crash.
– I replaced almost all one-lane interchanges with two-lanes of same type, except interchanges of two highways that are not starting from a nearby city.
– I removed barriers from all tolls which had no lanes for electronic payment.

I also deleted all Europe map from ferry-addon maps, like ROC. Now you can drive only on addon map(s).
The reason is: when I wanted to drive on addon maps and searched for job, mostly they are from one european city, like Rotterdam or Lille.
Then I drove many times on same roads and it became boring. If you don’t want all changes, there is file Deleted Europe, which do same. You can use only it.
If you want to retrieve vanilla map, use Better traffic flow vanilla map.
If you don’t have all DLCs, empty mod folder, go to map editor, save map and replace europe folder.

On Promods map, in those countries that work is finished and there are no further development,
I started to rebuild standard SCS’ interchanges and modify highways to real number of lanes (example, bridge over Danube now has 4×4 lanes).
Up to now about half of Hungary is rebuilt, including full Budapest ring road. Czech Republic, Finland and Italy are next in my plans.

One thought on “Better traffic flow”