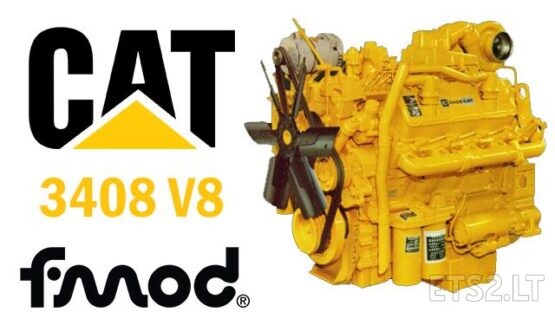 So I’ve learnt some more Fmod and audio editing and now present my 2nd mod.
A Cat 3408 V8 with air start options. Enjoy. I Recorded sounds from my V8 diesel engine

Adjust the engine, exhaust, turbo sliders til you find your sweet spot. the exhaust slider makes noticable change in sound output. my preference is above

This mod is Inspired by Chris Dinsdales Kenworth aka gm16v149

You have 8 engines to chose from

Credits to vsTerminus for the original engine torque curves. He went to alot of trouble to put them together so go show him some love. whole bunch of info there about the 3408 engine. This was done with permission. No sound files from his mod where used.
I have had to modify a few curves and ranges

This engine never left the factory with a jake. it had a brake saver. This engine has a jake because no way I was making a sound mod without a jake, one of the best parts of a truck

Its an “old school” engine so its only fair to be compatible with “old school” trucks. Its hasn’t been put into new trucks for a long time (mid to late 80’s)

Would this engine ever be in a Euro truck. probably not
Will I be going to hell for adding it to Euro trucks. probably