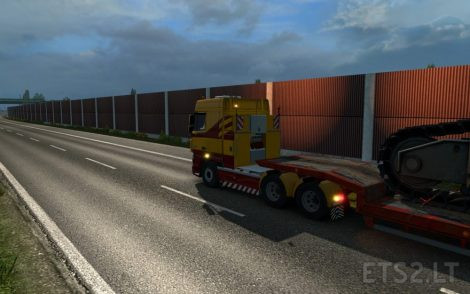 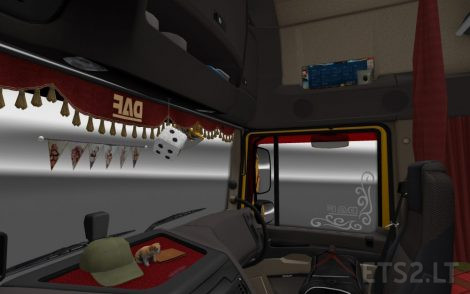 DAF XF 105 by vad&k v4.9
– Completely redesigned EU interior. We added a lot of new parts and replaced the standard texture
– Redesigned external model.
– Advanced coupling supported.
– Support of all possible DLC on accessories and flags.
– Support for coloring – not complete. Coloring on the roof to go to is not entirely correct.
– A large number of tuning salon and exterior model
– Added some paint_job.
– Added several independent accessories in the cabin (requires “the DLC – Cabin Accessories”)
– Reworked some curtains “DLC – cabin accessories” ( requires “the DLC – Cabin Accessories”)
– Added several options for chassis and cabs.
– And other changes
Mod replaces the standard DAF XF105 of the game.

Changelog for actual ver. 4.9
– corrections in the interior of the cabin Space Cab
– added slots to the cabine and some accessories to them.
– added options upholstery salons, the upper console and torpedo.
– fixed problems with the chassis-tandem control
– fixed configuration files of the trailer-tandem.
– the rear air intake is in tuning.
– added set of boxes (only for FTT chassis and cabs without rear spoiler).
– the number of cab variants is increased
– added nameplate “convoi exceptionnel”
– fixed bugs and more.

Installation
Extract scs files from downloaded archive to mod folder of ETS2. Enable them both in mod manager. Enjoy.

If you’ve used before this mod – do not forget to call in to the studio for the retrofitting of accessories that are in this update were made in tuning!