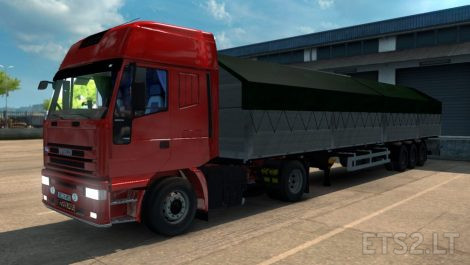 I downloaded and tested the EuroStar by Diablo on ets2.lt, but I realized that a couple of things, like the engines equipped on it, aren’t accurate at all like in real life. So I edited the settings of some files and, on the other hand, I also added something special for this amazing truck: my sound mod for the 520 HP V8 engine. For who noticed that, it sounds similiar to the one from the IVECO Turbo 190-38, because both have the same 17.2-liter V8 engine (launched in 1976 and dismissed in 1999). This EuroStar by Diablo looked a bit “shallow” to me, it look like it missed something, so I put my hands on it, and for the first time here we have a REAL EuroStar! At least that’s why I “reworked” this mod. Anyway, I hope you like it and enjoy!