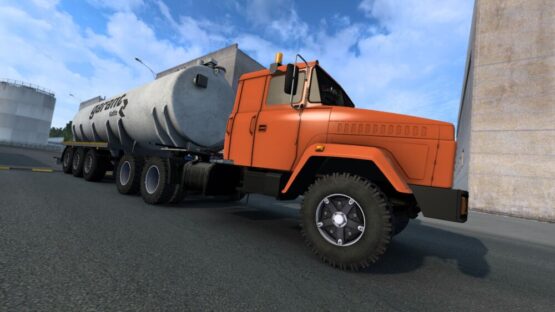 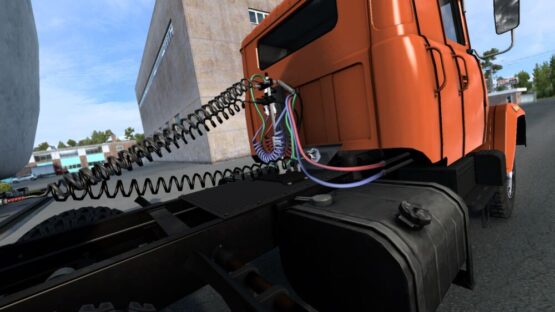 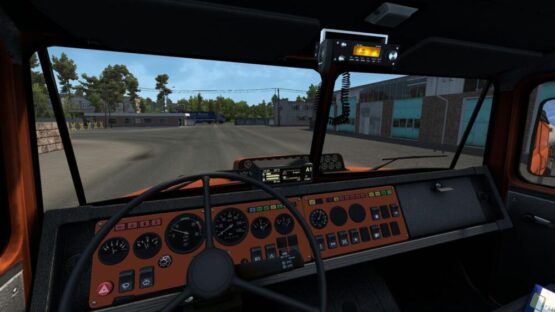 Description:
Autonomous, does not replace anything, is bought in Volvo and in KrAZ modification.
Your own salon.
There is support for steering wheel settings – these are positions up and down, forward and backward.
It has 4 wiper modes.
Has its own little tuning.
It has engine sounds only from KrAZ.
It has 1 chassis and 2 cabins – these are Day and Sleeper
Has cockpit accessories and toys from STEAM.
Has a personal, calibrated camera.
Has a realistic cable system for hitching trailers.
Has 1 window animation on the driver’s side.

Last change:
Attention: Errors are excluded, since the mod was tested on a test profile!
Converted all 3D models “PMG” and all animations “PMA”. (SCS Blender Tools).
Supports multiplayer with Convoy mode.
Added a personal, calibrated camera to the interior.
Fixed the position of all packs of rudders to the standard position.
Improved truck lighting at near and far distances.
Dashboard has been fixed.
Fixed display of side mirrors.
Fixed work of on-board computer and GPS navigation.
Aesthetically improved appearance.
Aesthetically improved interior appearance.
From the outside, the windshields and side windows are slightly darkened.
From the interior, the windshields are slightly darkened from the excessive brightness of the sun’s rays.
Fixed and improved truck physics.
The truck is completely updated in the dealer, company and truck gallery.
Found and fixed numerous errors in the game log.
The log in the game is 99.5% clean (percent).