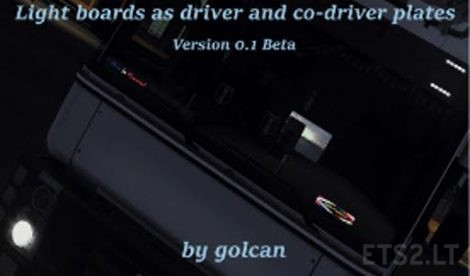 Compatibility:
Tested on ETS2 1.26 with Mighty Griffin DLC. Not tested on other configurations.

Description:
This MOD adds light boards to be used as driver and co-driver plates accessories.

Feature list:
The MOD includes two types of light boards:
– National flags light boards:
The MOD includes many national flags, with textures taken from SCS ETS2 National Window Flags DLC.
Not all the available flags has been included, and it is not due to any political reasons, it is due to the lack of free time to make the rest. Those will be added in future releases if possible.
Colors, brightness and contrast of the textures have been tweaked to work better in the testing environment.
Each light board name includes two letters of the country/nation. For example: FR=France, GB=United Kingdom, GR=Greece. You can find the codes here: https://en.wikipedia.org/wiki/ISO_3166-1 (see Alpha-2 codes).
– Fantasy light boards:
The MOD also includes five fantasy lightboards, one for each ETS2 DLC already released, described as “Viva la France!”, “Nordic TruckForce” and “Eastern TruckForce”, and other two reading “I love my truck”, with some of the words replaced by images (you can find them as Custom_1 and Custom_2 in the shop).

Installation:
Download the file golcan_ladcp_v0.1_beta.scs, copy it into the mod subdir that you use for the game, and activate it inside Mod Manager.

Use:
This MOD is intended for your personal use only. You can customize it, but reuploading and/or redistribution of it are prohibited. Respect original download link and credits.

Customization:
How a texture and effects look depend upon many factors, including graphics configurations.
You can customize the textures, adapting the brightness and contrast to your configuration. All the textures are inside the directory /custom/golcan/textures of the MOD, with file extension .dds. For national flag light boards, the file name is onoff_fl_C1C2, where C1 and C2 are the letters for the country/nation.
You can also replace the Custom_1 and Custom_2 textures by any others you want. Their textures are in the directory mentioned above, with name onoff.dds (for Custom_1) and onoff_fts_002.dds (for Custom_2). DO NO RENAME THOSE FILES, only change the contents.

Link for questions and comments in SCS Forums: http://forum.scssoft.com/viewtopic.php?f=175&t=227220

One thought on “Light Boards as driver/codriver plates v 0.1 BETA”