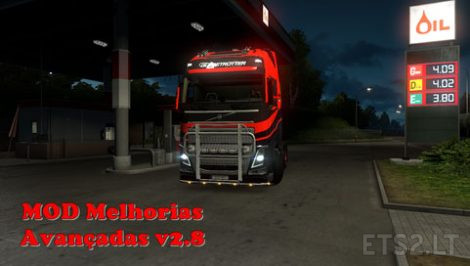 MOD Advanced Improvements v2.8
It is a great pleasure to present to you the latest update of our dear MOD Advanced Improvements, developed especially for you, full of news to lovers of simulators, would like to clarify some points regarding the Mod, our package results in 50% of other developers, all updates come with official credits of each creator, our other 50% comes from my own, they are tested and constantly checked so that there is no conflict with updates released by SCS Software, where we have 100% stability oh yes available to our audience. Thank you all, I hope you enjoy forgive any inconvenience and good game !!

• Fix the load (Driller) has corrected name.
• Correction in all transmissions (12, 14 and 16 speeds).
• Fixed chassis 4×2 Iveco’s Hi-Way.
• Fixed issue in the bank file.
• Fixed problem in the police file.
• Fixed problem with sound Scania V8.
• Fixed other problems in the sounds of Trucks.
• Various fixes conflicts in the game.
• Removed from the sounds (cleaner, retarder, collision warning “Sale of Trucks”).
• Problems related to the performance of fixed MOD.
• readjusted Files for better gaming.
• Full compatibility with the new update of the game.