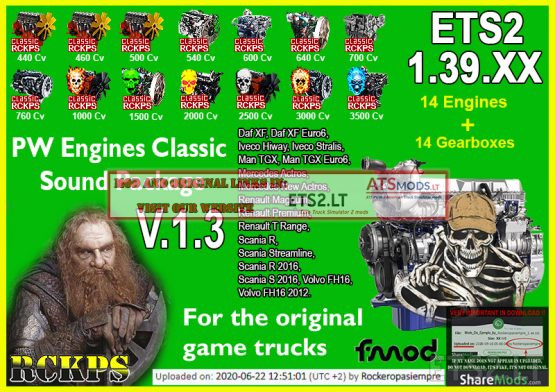 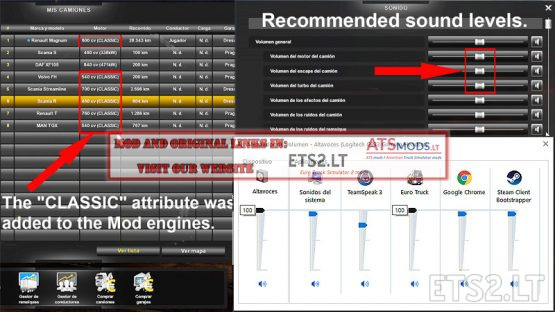 Does not work in versions prior to 1.39.XX There were many changes in this version.
If your engine doesn’t ring, just go to the store and choose the engine again.
The problem is solved.

TIP: If you use this mod, or any other engine or gearbox mod, and decide to disable it or remove it,
before doing so go into the store and assign a game engine and gearbox.
This way you will not have errors in the console in the future.

– It can be combined with Powerful Engines + Gearboxes ETS2 V.12.XX Pack.

– If you combine them, you will get a total of 28 engines and 14 gearboxes.

– Fixed Volvo FH16 sound bank problem.
– New MX-13 engine sound bank for Daf XF105 engines. (Kriechbaum original Audios).
– Improved start and stop sound of Scania R 2009.
– Turbo sounds, adjusted on all engines so that it is barely audible in the cockpit,
and can be heard perfectly when you open the window slightly.
– All engine sound levels, and turbo, were adjusted to the center volume of the level bars. (See the image of optimal sound settings for the truck.).
– The “CLASSIC” attribute was added to the mod’s engines to be able to see which engine we have in each truck, within the truck manager.
– Fixed obsolete “sound_retarder” attributes of the retarder sound.