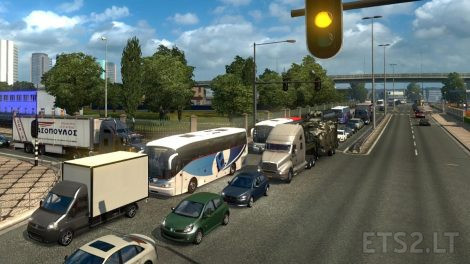 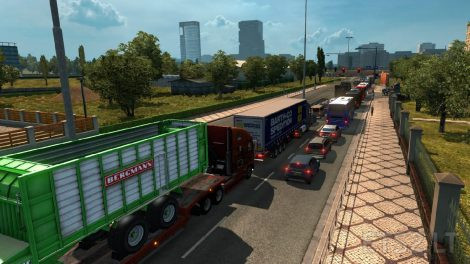 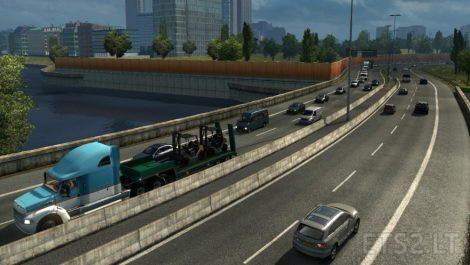 This is my traffic mod which I have built in many days of testing different parameters of the Ai traffic.
The foundation of this mod was possible thanks to Piva’s mod, Traffic Density from which I have kept those few parameters which I have not fully understood.
Thanks also to Frachti and Brainiac for having explained to me a few parameters.
My idea was to create a realistic traffic density per daytime and even more, by type of the road, especially to increase the traffic during the night on motorways, and keep it low on local roads, as we find naturally in Europe. To achieve this I had to calculate precisely and play with the following parameters:
– max_vehicle_count, essential for limiting the number of Ai vehicles and the license plates depleted warnings (still a bug that shall be corrected by SCS, however I have managed to reduce a lot the numbers)
– spawn_ratio and spawn_max_count to establish the proportion car/trucks/buses. Currently the proportion cars/trucks is 3:1 (can be easily modified to personal taste)
– spawn_daytime_rates, important to set the density per hours and even half hours on rush periods of the day.
– spawn_count_limit_modifier and spawn_frequency_modifier for each type of road; generally there are 10 times more vehicles on motorways (7 for expressways) than on the local roads very noticeable especially during the night
– semaphore_profile.sii, I adjusted some parameters to increase traffic fluidity in cities, essential for high traffic density.

The achievements of my mod are the following:
– very high density in the morning and afternoon, especially on motorways and expressways, but also in cities with frequent traffic jams (2 maximums at 8:30 and 16:30)
– generally high density on motorways the whole day and reasonable high during the night, with a minimum at 3 o’clock where still a significant number of vehicles can be spotted
– relatively high density during the day on local roads (1×1) and variable frequency that makes possible overtaking other vehicles;
– low and very low traffic density on local roads during the night
– Increased semaphore cycle on all crossroads except for 1X1 crossroads. Local crossroads have still reduced semaphore cycle due to the reduced number of vehicles
Other improvements:
– increased the duration of yellow after green to 3 seconds on all semaphores (essential to avoid fines)
– reduced the duration of yellow after red to 1 second (avoid fines if leaving too early)
– improved semaphore cycle on roadworks. The duration of red on both semaphores is now 12 seconds.
– fixed barrier semaphore on

How to install:
– place the attached scs file above Ai traffic mods and above all map mods in the load order

Compatibility:
– tested on game version 1.26.4.3. Tested also on ProMods, RusMap, Southern Region map and ROS.
– it is not working in Hungary map

Re-uploading this mod is only allowed by keeping the original link and credits.
Author: Cipinho
Acknowledgements: Piva, Frachti, Brainiac