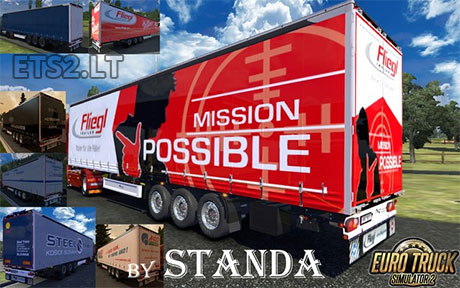 The original model semitrailer is converted and adapted from GTS to
ETS2.
Model semi-ridden just like AI, joined his contract so I can connect?
in different companies with different skins.
Contains definitions of cargo which are ETS2.

By the GTS: BalczaK and Stocki
Adjusting for GTS: D A W E
Convert and edit in ETS2: Standa (sobby)
Test ETS2: they

— ATTENTION —
Not to be used? with other MODOM in which the model Overwriting naves
reefer.
By not bear any responsibility? for damage caused by this MODOM.
Install on their own responsibility?.
Before you make a deposit using prieèinku “profile” (Documents \ Euro
Truck Simulator 2).