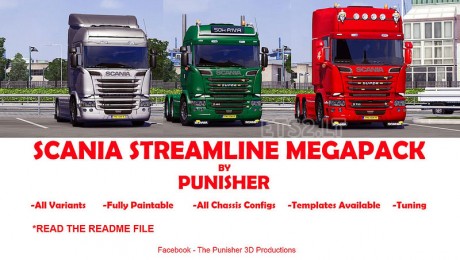 DO NOT RE-UPLOAD THIS PACKAGE TO OTHER FILE PROVIDERS!!!!

INSTALLATION
-Put ‘Scania Streamline Megapack by Punisher.scs’ and ’50k_addons.scs’ or ’50k_addons Edited by Juli JH'(Contains Scania
table and new curtains) into your mod folder
(C:(username)\Documents\Euro Truck Simulator 2\mod) and then activate them before entering your profile.
-The truck is standalone and can only be found in European dealers (UK Interior Variants are still available).

KNOWN ISSUES:
-The Topline lightbox is conflicting with 50Keda’s R2008 so if you have his R2008 active, it might be out of place,
However, if you disable his truck, the lightbox will be fine. Or you can remove ’50k_lightbox_topline’ pmg and pmd from ’50k_r_high’ folder in
Keda’s R2008.
-The Highline template is not the best available but this was because of a very unpredictable issue I had earlier this
year which is not really fixable and for that, I am sorry.
-There are some errors in the sideskirts but I will remake them in a new version coming soon, I did not want to do
it before releasing this version because it would have taken too long.

This is not the final version of this mod, there will be updates to the project in the near future.
Leave suggestions for updates on my Facebook page – The Punisher 3D Productions.