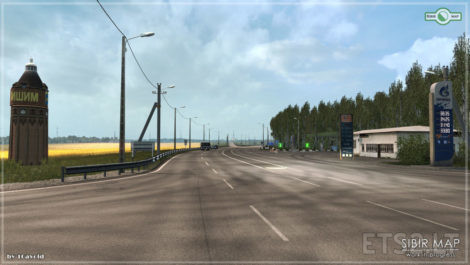 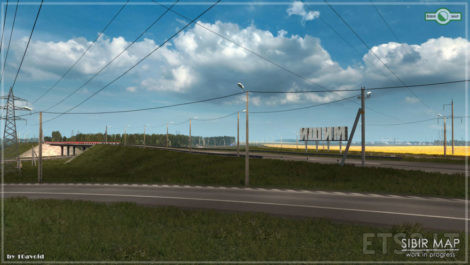 Exactly one year ago, on August 6, the existence of the SibirMap project was announced. 365 days it took to release 3 large versions of the map, slightly more minor updates, create about 300 objects, and pave half way from Omsk to Tyumen. Not a bad result! I want to thank you all for your support, and for following the project)
In honor of this event, I decided today to mark the date by issuing a new version of the map, with the number 0.3.1. Right here and right now)

Description of the map:

– A new section of the P402 route from Tushnolobovo to the Ishim was added, including the villages of Ravnets, Jubilee, Lozovoye, and the interchange to Kurgan (Ishim city itself is planned in the next versions).
– Changed interchanges near Krytinka and clover on P254 (corrections, switching to Italian prefabs, adding lighting, etc.)
– Added new objects.
– New firms have been added, including agrofirm Avangard and agroholding Yubileyny (Tyumen region).
– Bug fixes of the previous version are corrected (the road-killer Lyuban-Maryanovka is corrected, the bumps at the route Loris-Melikovo-Tyukalinsk are recycled).
– Fixed interaction of the map with DLC_Schwarzmüller, added custom skins for trailers.

ATTENTION: The map is started by a separate module! To do this, you will need to create a new profile and connect the mods before starting the game by selecting the sibir.mdb module.

DISCLAIMER: ATTENTION! On the map, project objects RusMap and Southern Region were used. All rights to the models belong to their authors.

ATTENTION! Packs on trailers can replace the original skins for companies on the map SibirMap!

Necessary map dlc: (GE, Scandinavia, Viva la France).
DLC Italia for the game is not needed!
Fashion on the weather seasons can be unstable!

Official community of the map: vk.com/sibirmap

NEED TO DOWNLOAD AND INSTALL ALL OF THIS REFERENCIES!