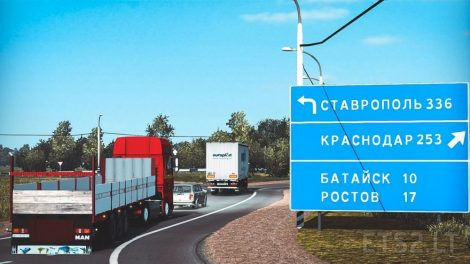 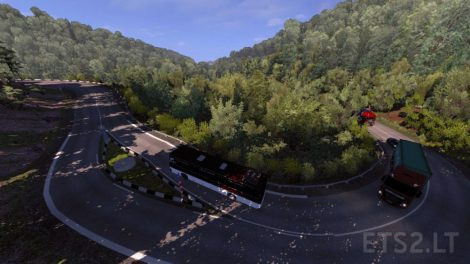 Come and visit the South of the Russian Federation

Key changes: new and updated cities and roads, support to run the game in DirectX and OpenGL

•The game world
-Added new locations, such as Nevinnomyssk, Kanevskaya, Semikarakorsk, Saranovskoe, Smolensk
-Added road Р268 Timashevsk-Starominskaya, Р251 Ust-Labinsk-Kropotkin, Smolenskaya-Saranovskoe-Highway M4″don”
-Added new forest roads to the plots
-Completely redesigned the city of Tikhoretsk and the section of highway Р217(M29″Caucasus”) Tikhoretsk-Kropotkin
-Reworked a lot of roads with the use of new assets with asphalt HD, Russian road markings
-Added and changed some fork in the road, they are shown to their real world counterparts
-Improved such settlements as Tuapse, Krasnodar, Timashevsk, Novorossiysk, Adler, etc.
-Blocking a dead-end road crosses and arrows replaced
-Other cosmetic changes

-More agricultural vehicles on the road, passing farm lands
-Improved rail traffic: trains changed the physics, added a horn and a whistle for locomotives, shunting trains added, increased the diversity of locomotives and cars, reduced frequency of trains.
-Revised the density of traffic on all local roads
Compatibility: 2.16 map ProMods, RusMap map 1.7.2, paki traffic from Jazzycat. Compatibility with other cards not tested.
If You have no DLC “Vive la France”, download and install the FIX . ATTENTION! This fix does not provide You access to the territories of France from the Supplement, but only gives the opportunity to play with modifications to require this addition. The location of the fix in the list of active modifications does not matter.
If You have a weak PC, then download and install the Addon , it will reduce the range of rendering hi-poly models of vegetation, which will provide a performance increase(higher FPS). In the list of active
modifications of this addon needs is ABOVE all connected modifications.