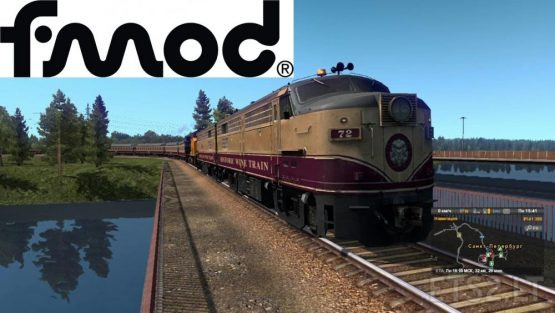 This mod does not replaced European trains, only add Trains from America. it should working to all ETS2 maps

For some locomotives and rail cars add skins with logos of real companies.
Now all freight trains are drived by more locomotives, from 2 to 5 coupled head DMUs and some additional in the mid and the end of the trains.
The length of trains has been changed, passenger: 7-15 cars. freight: 20-60 cars, depending on the number of sections and type of locomotives.
The max speed of freight trains changed to: 100 KM/h. for Fast Speed trains: 150-300 KM/h.
Added sounds for trains from the Sound Fixes Pack and Improved Train Sounds
All passenger trains added a reverse section locomotive.
also increased stopping distance for the all trains.
———————————————————————————–

Attention!
version 3.5 for 1.38 may disrupt traffic density mods. please put your mod on a traffic density higher than this mod if their combination causes crashes
This mod can be used along with the mods changing European Trains, without conflicts because this mod does not replace trains in ETS2

The presence or absence of any DLC does not affect the mod.

I’M VERY THANKFUL OF THE AUTHORS for all these hardwork!

When using the mod, it is strongly recommended to add the following line to the game launch properties:
-mm_max_tmp_buffers_size 1000

this will significantly increase the number of game memory buffers to load a large number of wagons without degrading performance due to the lack of performance of the game engine.