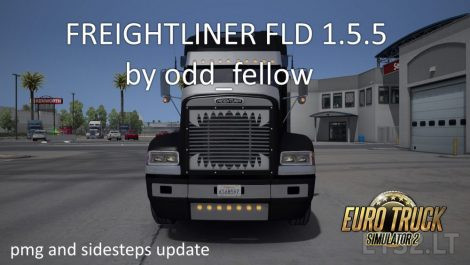 1.5.5 update changelog:
– Mod is now officially ERROR free. There are some occasional texture compression warnings, but doesn’t have any impact on gameplay, fps or whatever.
– Every pmg model has been updated to the latest version.
– Log won’t be whining about camera azimuths anymore.
– Sidesteps moved to optional tuning where they belong, please check out.

First of all, if you like my mods and really want to endorse, become my patron on Patreon.com. Your support matters. I’ll be making more high quality content with your support.
https://www.patreon.com/odd_fellow_modding

If you don’t want to become a patron and just want to throw two cents, here’s my PayPal:
[email protected]

I won’t even bother making a list of all tuning options as there are too many. I recommend you to pay full attention to all of the upgrade dots while in truck config menu, because sometimes it’s not obvious which dot does what.

If you play ETS2 and notice crashes while in truck config menu, it may be related to missing Accessories DLC. I personally couldn’t reproduce this crash on my setup/never had any problems with it.

You can purchase it at Kenworth (ATS) or Renault (ETS2) dealership. UV template included in the archive.

Tested on 1.28.x game version. It may conflict with my previous Classic XL mod, so remove it before activating FLD. You have been warned!

This mod is considered freeware and is intended for personal use ONLY. Reuploading, reselling, reclaiming ownership, unauthorized modifying, in other words, changing a few things and calling it your mod is strictly prohibited, you will receive a report and uploaded file will be removed.