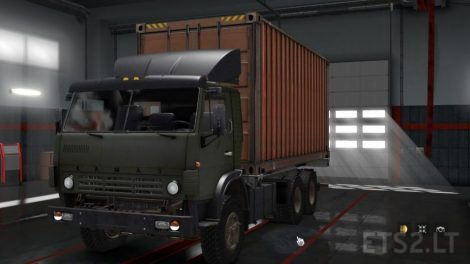 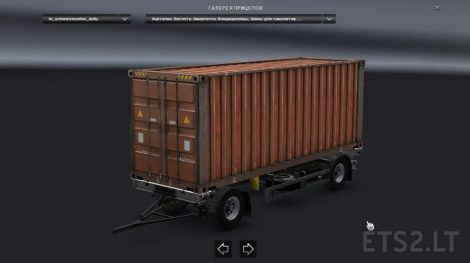 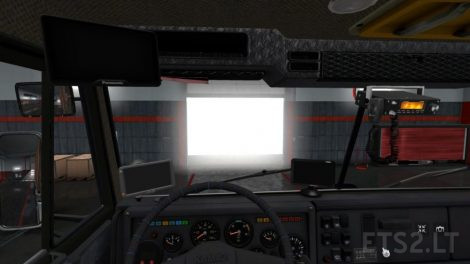 – Autonomous truck, purchased in the Volvo showroom
– 1 cabin Altcam with sleeping place, removable panels, visor and spoiler
– 1 chassis Kamaz 5320.5845.82 with a 6×4 wheel arrangement and a 20-foot container installed
– 4 engines Kamaz 740.11-240, Kamaz 740.60-360, YaMZ-238B and “tutaevets” TMZ – 8424.10 with traction characteristics according to specifications of manufacturing plants
– 3 KAMAZ 154.1700025 with divider, LIAZ Praha 10P 80 with the Raba reducer and ZF 16 S 1820 TO Ecosplit with the Raba gearbox.
All gearboxes and gearboxes have gear ratios according to specifications
manufacturers
– All engines have their own new original sounds
– Original interior with support for DLC Cabin Accessories and new slots for addons
– Added to the interior of the monitor with the ability to play video clips and CB-radio with the ability to reproduce the record of the channel 15 of the Russian truckers.
Control of the video player and CB radio is via the original new bortcomputer (“Sh” key)
– GPS-navigator MIO Cruiser with the original background of the iGO Primo Truck navigation system
– Fog lights for fog lights with low and high beam
– Euro coupling for Nefaz trailer of new generation
– Its logistics with the correct distribution of the weight of the load on the tractor and the trailer.
The trailer spelled out all cargo in the game, including the goods of the Orient Express
– Its real physics of tractor and salon cameras
– New external and internal cameras
– Fully implemented all the sounds of the pneumatic system, transmissions and electrical equipment of Kamaz
Real original recorded sounds of KAMAZ signals
– Trailer Nefaz 8332-08 on a new chassis with a trolley
-The chassis is equipped with a 20-foot container
Replaces all trailers in the game
-Mod is built on a medium-sized 3D model with a size of 15 MB and fully complies with the standards of the game engine of the game Prism3D, and the requirements of developers from SCS
-Does not reduce FPS and “hangs” of the game
-It has an absolutely clean log without warnings and errors
-It is not compatible with other mods on physics!
When creating the mode C of the OFFICIAL PERMIT of mTG, knoxx_xss and vita-1980, some elements of 3D models and operating time were used