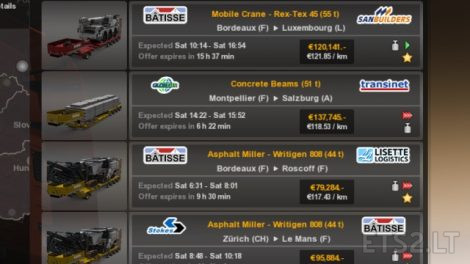 ** After activating this mod, you need to sleep once or twice (in the game, not in real life) before the prices change. **

Have you ever wondered how come the heavy weight 50+ tons cargoes have similar prices with goat cheese and some used papers ? Or have you ever felt that the heavy weight cargoes should have the highest prices over normal cargoes ? Because you have spent a lot of energy and effort to haul those 50+ tons, and not to mention how much money you have spent upgrading your trucks just to hual these monsters. You deserve more than the goat cheese price !
——————————————
ORDER OF THE NEW PRICES ( 1 being the lowest , 6 being the highest )

2. All ADR cargoes. ( Slightly higher than all of the above )

However, all cargoes are still subject to the special conditions such as Fragile, Urgent, Important deliveries.

Please note that the prices you see in the photo and the VDO are based on a level 20 driver. Not a Newbie level. The highest price in this mod is just about 2 – 4 times higher than the lowest price (the normal cargoes remian vanilla value).

By subscribing this mod you have agreed that:
1. If you want to reupload, only use the original link below:
http://sharemods.com/72sdqfemt5ln/fair_price_1_1.scs.html

This mod is and will always be free of charge. However, tips are always appreciated.
You can donate by Paypal or Steam Wishlist/Trading Cards.