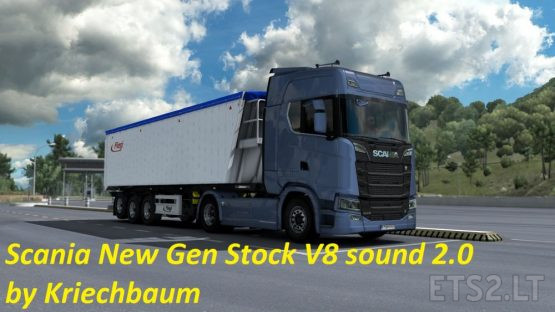 It’s finally here, my stock new gen V8 sound, a mix of youtube videos and some scs samples.
I want to thanks a lot Max2712, he recorded the interior accessories sounds, and put them in the sound mod. He helped me a lot.
For the sound mod itself, well, it’s the same as in 1.36 but totally rebuild with Fmod. There’s still a small lack of bass in the interior but as you know we cannot change it for the moment. I hope scs will let us adjust this through the equalizer in Fmod.
I’ve also added my standart european horn, and as a separated mod, you will find in the archive a mod that adds the air brakes, air gear and an another reverse sound for the Scania.
This sound mod works on the S and R new gen V8 by SCS and the V8 new gen P and G series from Eugene.