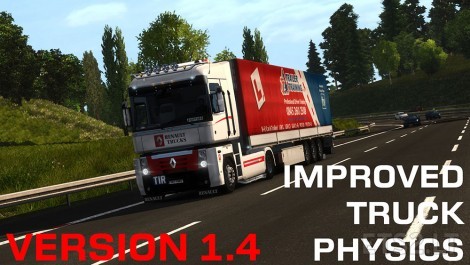 Mod aimed at the players, who want more difficult and life like physics in ETS2. It adds lots of changes to almost parameters, related to truck and driver behavior.
This version contains major changes, compared to previous 1.3 version. To start with, it now goes back to traditional (for this mod) system of custom chassis files.
Also, there is no more soft and normal versions, there is one, “suitable for all” version.

Supported trucks (IMPORTANT!):
Mod support all trucks, but full support (which means custom chassis files) available for this trucks:
DAF XF by 50k, Volvo FH Classic and FH16 2013 by Ohaha, SISU and all Scanias from RJL, Volvo VNL 670 and 780, MAN TGX Euro6 and TGA by Madster, Scania 143 by Ekualizer and Iveco Strator by Shoofer/EM Group, Scania P/G by GT-Mike, Kenworth T800/W900, Freightliner Classic XL/Argosy, Freightliner FLB by odd_fellow, Kirilloid22, Dmitry68, Gosha Motor; vitalik062, Kriechbaum, FRANK_WOT; MB Antos by DANZ; Scania R730 by Bogdan Kasalap; Scania 4 by satan19990, NewTon, Mr.Poland/Chudy/Wojtas, Anaheim i EDD123; Peterbilt 387 by Ch_Vitalik, Kirilloid22, Dmitry68, Gosha Motor; Peterbilt 389 by Viper2 MAZ 5432, KAMAZ 53212, Ural 43202.
To use this mod with these modded trucks, install it with higher priority!!!
If you have some other not listed above truck mods, try to install them with higher priority, than this physics mod, to avoid possible problems.